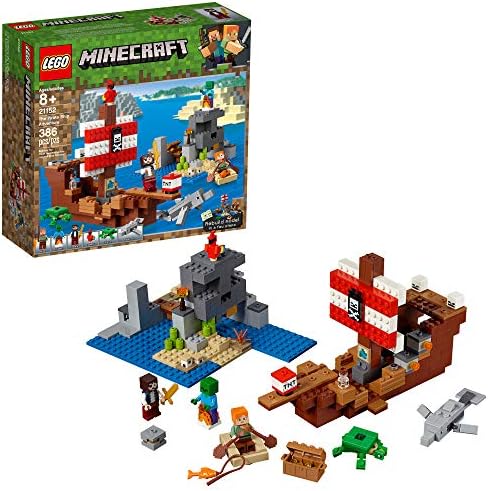 Build a pirate ship with gold detailing, pirate banner, gangplank, cannons and a cute resident parrot. This LEGO Minecraft Pirate Ship Adventure set comes with a host of new-for-January-2019 features and characters, including a minifigure with pirate skin, a Minecraft dolphin and a Minecraft turtle with 2 eggs. Place the zombie in the special base for a Minecraft zombie-fire effect and ward off hostile mobs with the ship’s flick-missile cannons. Enjoy hands-on Minecraft pirate adventures with this LEGO Minecraft pirate ship toy. Easily swap the ship’s modular building sections to create a tropical pirate base and combine it with other LEGO Minecraft toys to create your own unique LEGO Minecraft universe! Also includes an Alex minifigure.
Build a pirate ship toy with working flick-missile cannons, gold detailing, pirate banner, gangplank and rowboat, plus a host of Minecraft mobs—all in a LEGO Minecraft skull island setting!
This LEGO Minecraft toy building set includes 2 minifigures: Alex and a pirate, plus new-for-January-2019 Minecraft dolphin, parrot and turtle figures and a zombie figure with a new fire-effect base
Measures over 5” (15cm) high, 9” (23cm) wide and 9” (23cm) deep
386 pieces – For boys and girls aged 8+ and for fans and kids of all ages
The LEGO Minecraft The Pirate Ship Adventure 21152 construction playset can be built together with all other original LEGO sets and LEGO bricks for creative building